There are no words to describe Alexander and his wife’s emotions when they stopped by the Foundation after returning from his appointment with the cancer specialist in San Salvador. He spoke non-stop from 5:00 to 6:00pm with every emotion available to man. His voice going from soft to loud; him and his wife crying to laughing all in the same paragraph. He would deliver his words in a loud, rapid-fire succession, as if he was a preacher giving a sermon without taking a breath, then his voice would turn soft and reflective as he pointed his finger upward and made references to Dios (God). Wanting to be respectful of the situation, Andrés did not interpret Alexander, until he was finished an hour later. His wife did not look up or back into your eyes as much as Alexander did; he would look straight into our eyes trading off between Andrés and I, as he delivered his thoughts. She stared mostly at the floor or out the door, as if in a daze with a scared look. 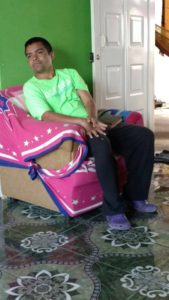 The specialist at the cancer hospital told them that the only option is to remove the tumor and send it in to determine if it is the same cancer as before or different then decide what to do. Of course, with this comes all the risks as before and more, because it is intertwined on the base of his brain. Or do nothing, and it is over. He is going back to San Miguel on Monday to consult about when they will perform this operation. His referral from the specialist to the Dr. that would be doing the procedure is marked URGENT. Alexander is most worried and afraid for his wife and four young kids. He tells his wife and kids that whatever happens he will be ok; that he trusts in God. But he also says that he knows if he doesn’t make it it will be his wife and kids that will be in pain and suffering. Alexander told us that he is so humbled but yet grateful that God had put all of us in his and his family’s life to be there to walk with them. He says he prays to God every night, saying he does not have the strength and to tell or show him what to do. He says God answered him by working through all of us.

Alexander also says he is happy about his life and how everything has turned out for his family. He feels better knowing that his family now has a place to live. It’s amazing how he keeps saying he is grateful to God for proving his faith this way. Alexander says he will always see God’s Glory no matter what.