Skip to Main Content
While most pray, there are others that prey.
It was a typical Wednesday evening in Berlín, Usulutan. The streets were quiet, except for an occasional person still walking home from their long day working probably at a coffee finca. There was the usual crowd of young people gathered at the basketball court next to St Joseph’s, the Catholic Church in town, across from the park. Andrés was returning from giving rides home to those volunteering to help make the float that our queen candidate will ride during the week-long St Joseph’s celebration in March. Encountered along the way in the distance was the figure of a person along the street. Upon getting close enough to see them, it became obvious we knew who it was — a young women who has two children; one of which she brings to our Foundation to receive help. But she looked different this time. Her pleasant and quiet demeanor that is usually accentuated with a subtle look of hopelessness in her eyes was replaced with a look of shear desperation and panic. Her eyes were red and wet, and tears were still flowing down her flushed cheeks.
She tries to support herself and children by making things to sell on the street. This day, she had a basket that had some 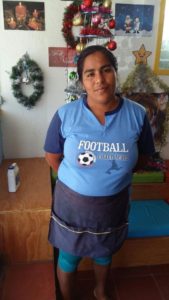 type of drink in small plastic bags one could purchase for a quarter. There are many that try to survive this way, and many days they just earn pennies.
Upon recognizing a friendly face and a little questioning as to her condition, she began to share her circumstance. She needed to buy some medicine for one of her children and was also thinking about purchasing more things to try to increase what she could sell, hoping to make a little more to support her kids. The problem is that she borrowed $250 to buy medicines and other items from a person who loans money to those who cannot get credit elsewhere. The terms she was given was 10% a month, so not only did she owe the $250 but another $25 after just one month; compounded, this equals 214% interest a year. Little did she know, there was no way she would be able to make enough to even pay the interest. Her profit on what she was trying to sell was less than the interest that she was required to pay, let alone any principal. The day we ran into her was the 2nd month anniversary of her loan. After the first month, she didn’t have the interest, so it compounded to the next month with the understanding that she would pay on the 2nd month. When she was approached to get current, she was further behind and didn’t have enough. As is often times the case, the loanshark is allowed to go to a judge and have the person incarcerated until they pay the amount owed. However, the balance also keeps increasing. This is what she was facing this day. No wonder the look of desperation. Who would care for her kids or elderly family members? What was to become of her? For us to think that this doesn’t happen, believe me, it happens quite regularly. It is hard to determine where to place blame. Is it those that borrow under such conditions and should know better, or is it those that prey on the less fortunate and take advantage of them, while they are the most desperate and vulnerable?

What would you do if your child is sick or hungry or your family is without shelter and basic living conditions? There really aren’t any safety nets in El Salvador like the ones that so many take advantage of here in the US. For many, like this faithful young woman, they only have prayer left. That night her prayers were answered when God put us in her path. Now, what I would like to ask is that we all PRAY for those that PREY on the most vulnerable among us.

– Jerry
P.S. Each day brings a new lesson. Can’t wait to see what tomorrow’s is!!