“It is repeated many times by people of faith that “GOD never burdens us with more than we can handle.” It gives me great pause to wonder why such pain and suffering would be laid upon such a young and innocent girl. Reina and her family are another great example of having a strong faith and accepting the challenges they are given, while at the same time being thankful for each of the blessings they have. It seems the poorer you are, the more thankful you are.” 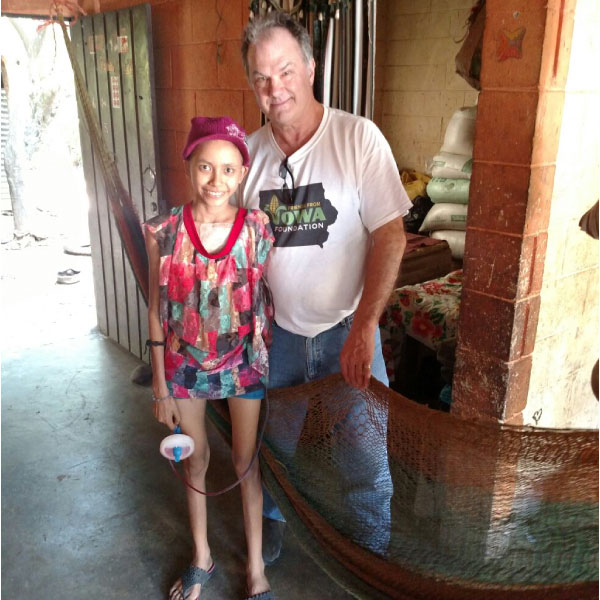 Unfortunately, the chemo treatments have not been enough to beat or slow down Reina’s cancer. It has progressed to a late enough stage that time was not on our side. Last Wednesday, January 27, Reina was admitted to Our Lady of Peace Hospital to have her left arm removed in hopes that this could stop the advancement of her fast growing tumor and save her life.
The surgery went well, and Reina is recovering. She is such a strong little girl; never complaining and always trying to smile. I know there has to be much pain and anguish somewhere inside her. 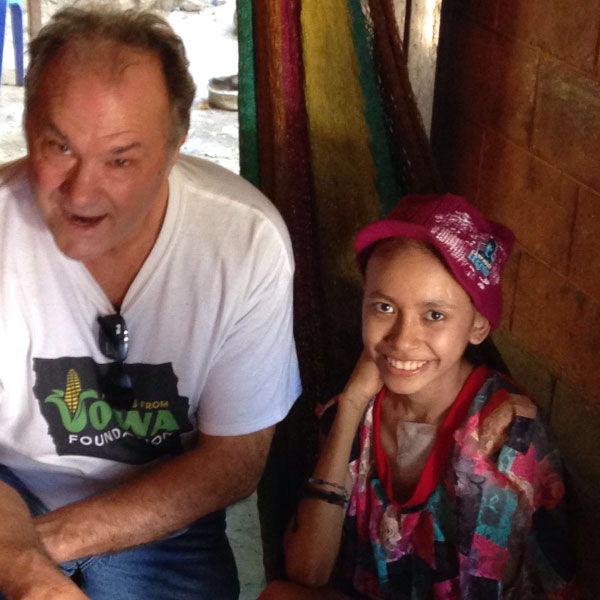 Upon my arrival on Friday, January 29th, while driving to Berlin from the airport, we received a call from Reina’s mother, Maria. She told us that Reina had been released from the hospital. My first thought was this could not be possible since it had only been 36 hours since her surgery. Of course, we changed our plans and went directly to the hospital. We paid her hospital bill and loaded everyone back into the truck and headed to El Recreo to take them home. As usual, some of us rode in the back hoping the clouded skies would not decide to open up and drench us. It was a long day since getting up at 3 AM to start the journey here and it was well after dark when finally getting to Berlin, but our day was nothing compared to Reina’s grueling ordeal. 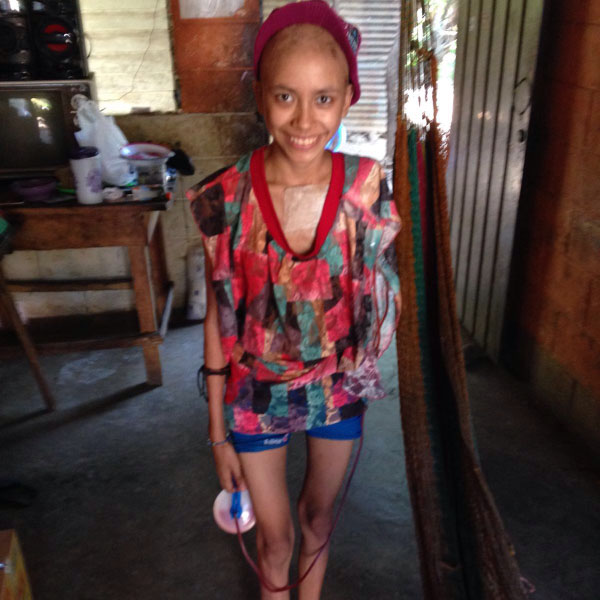 A follow-up consultation was yesterday, February 2nd, with the surgeon. He was very pleased with the results and told us that she was healing faster than normal. She can take baths like usual to remove the bandage during the day and allow the site to get air. Of course, his biggest concern for her is that she needs to eat, eat, eat. It is very important that her tiny emaciated body gets much-needed nutrition. She needs to build up her weight and strength, so her body will be able to withstand follow-up chemo treatments in about a month. If she can improve her physical health, the goal is three treatments given three weeks apart. 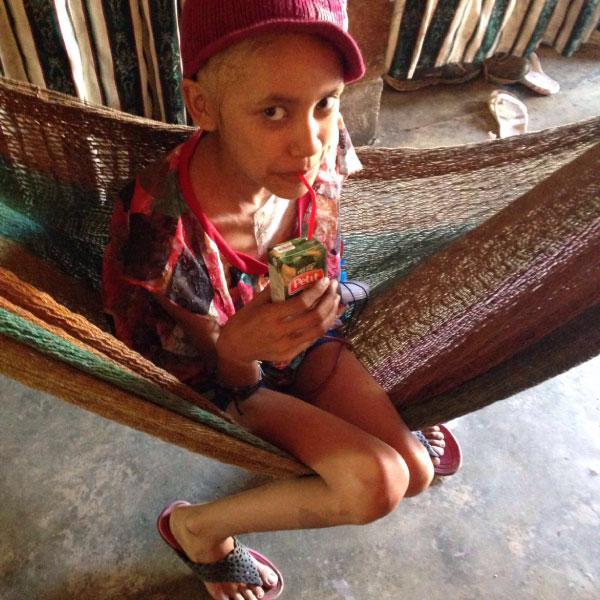 Reina was given a prescription for vitamins, injections for 5 weeks to help make red blood cells, and something for pain management. She will return for another follow-up appointment on Thursday, February 4. If all is well, there is the possibility that the drain tubes could be removed. Reina and her family are to measure the output to determine this by this next appointment. A second scan will be done later as she recovers from the surgery and gets closer to the chemo treatments to see if radiation treatments will be necessary to complete the elimination of any remaining cancer, if any is detected by the scan. The first scan that was done before did not show cancer anywhere else, but as the doctor explained, these scans will be done to make sure nothing was missed or has started elsewhere since the surgery. 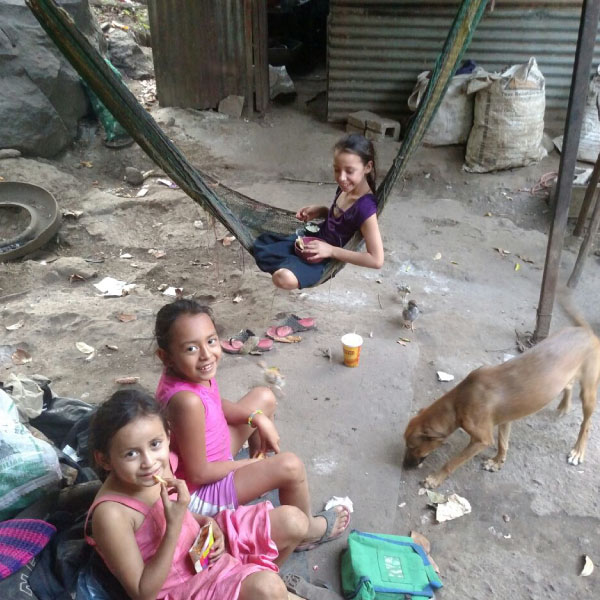 Having known this family for over eight years, I know they are a very poor and humble people with limited resources. Mario, the 50 year old father, tries to eek out a living by tending 1/2 menzana (about 3/4 acre) raising corn and beans. Maria, the 40 year old mother, raises their 5 daughters: Idubina (16), Lucia (16), Reina (14), Orbelina (10), and Alicia (7). One of the first things you notice when you visit them is that they have no chairs or table to sit, do homework, or eat at. Ten-year-old Orbelina has never had a bed, let alone a mattress to sleep on; only the hammock. The twin girls sleep on the floor with what looks like someone else’s discarded mattress that one would find along the road or in the dump. Reina and her parents sleep on beds made from tree limbs for legs and rope woven across the top to provide some support with only blankets covering them and no mattress. The youngest, Alicia, shares the bed with her parents. 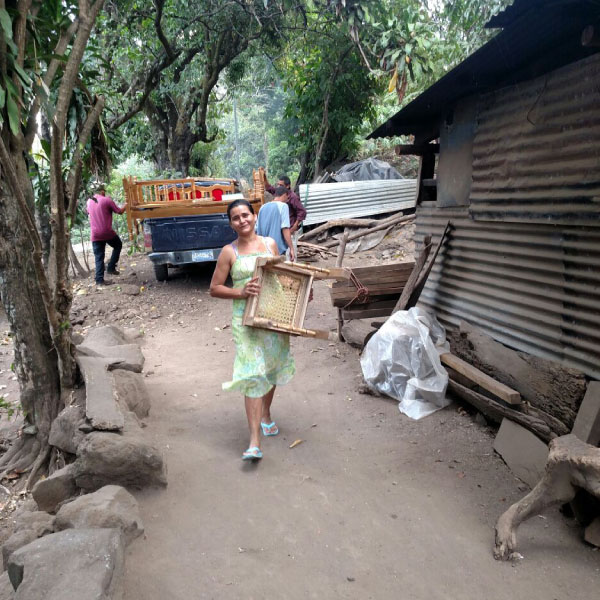 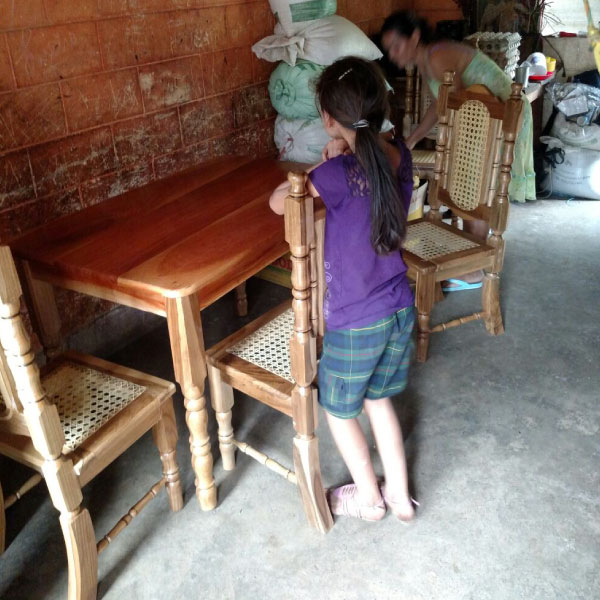 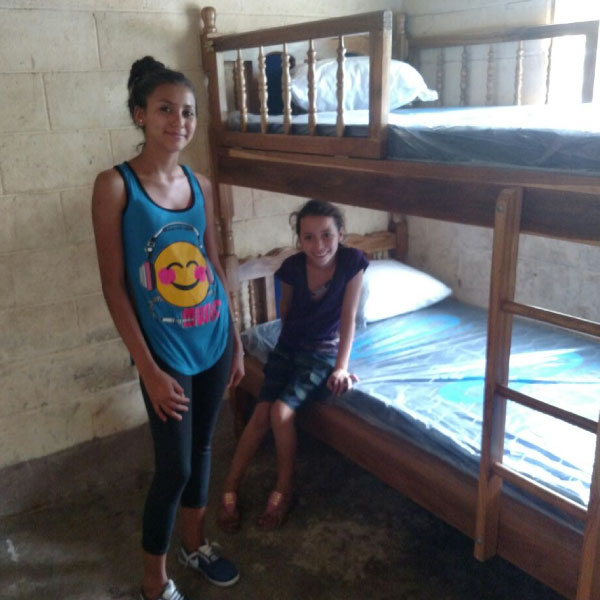 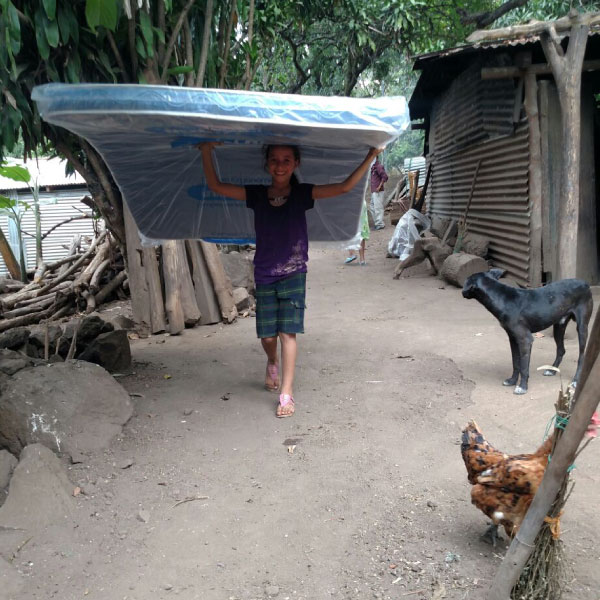 FFIF surprised Reina’s family with the gift of a new table and chairs for the living area, two sets of bunk beds, a twin bed, and a double bed for the parents. Of course, each bed has new mattresses and big plump pillows for all. They were all overcome with joy. It was a very humbling experience to witness all 5 sisters, who have never had a bed to call their own, have this opportunity; especially Orbelina who only slept in the hammock. 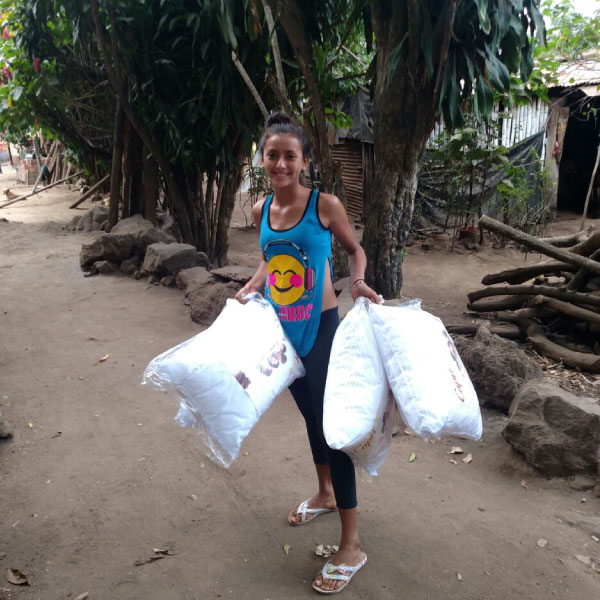 After the follow-up appointment, yesterday, we stopped at the Sherwin Williams paint store, and I asked one last request: If they were given paint, would they like to repaint the bedrooms and living area of their tiny house?  Without any hesitation, they smiled. We all went in and the girls picked out the colors: 2 gallons of fuchsia for the bedrooms and 2 gallons of light blue for the rest. Paint brushes, rollers, and a roller pan were added to the purchase. When we got everyone back home, it was late afternoon around 5pm. They did not skip a beat after unloading their supplies, and they began painting as we were leaving to go back to Berlin. I am certain when we return tomorrow the walls will be bright and clean looking; hopefully, this will help them with a new beginning as Reina and her family start the new chapter in their lives. 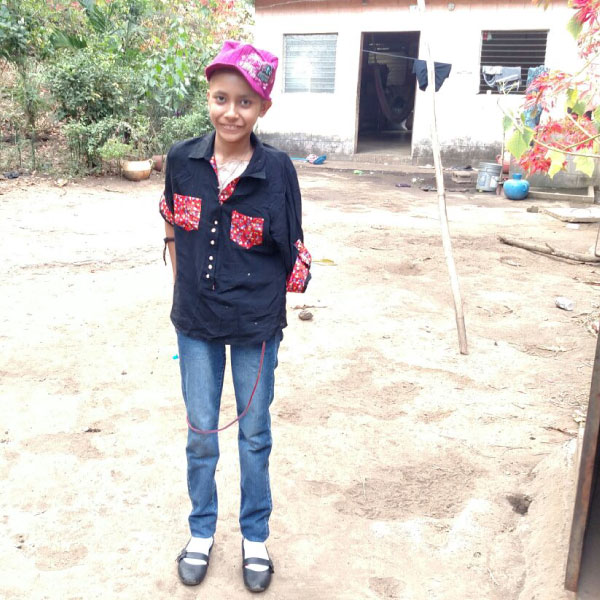 P.S. A pickup truck bed full of groceries was also delivered enough to last a few months. Will try and keep updates posted as this goes forward.
Jerry 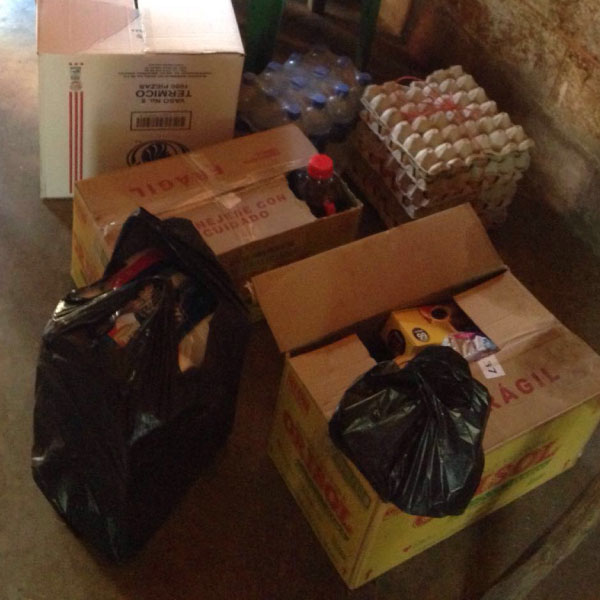 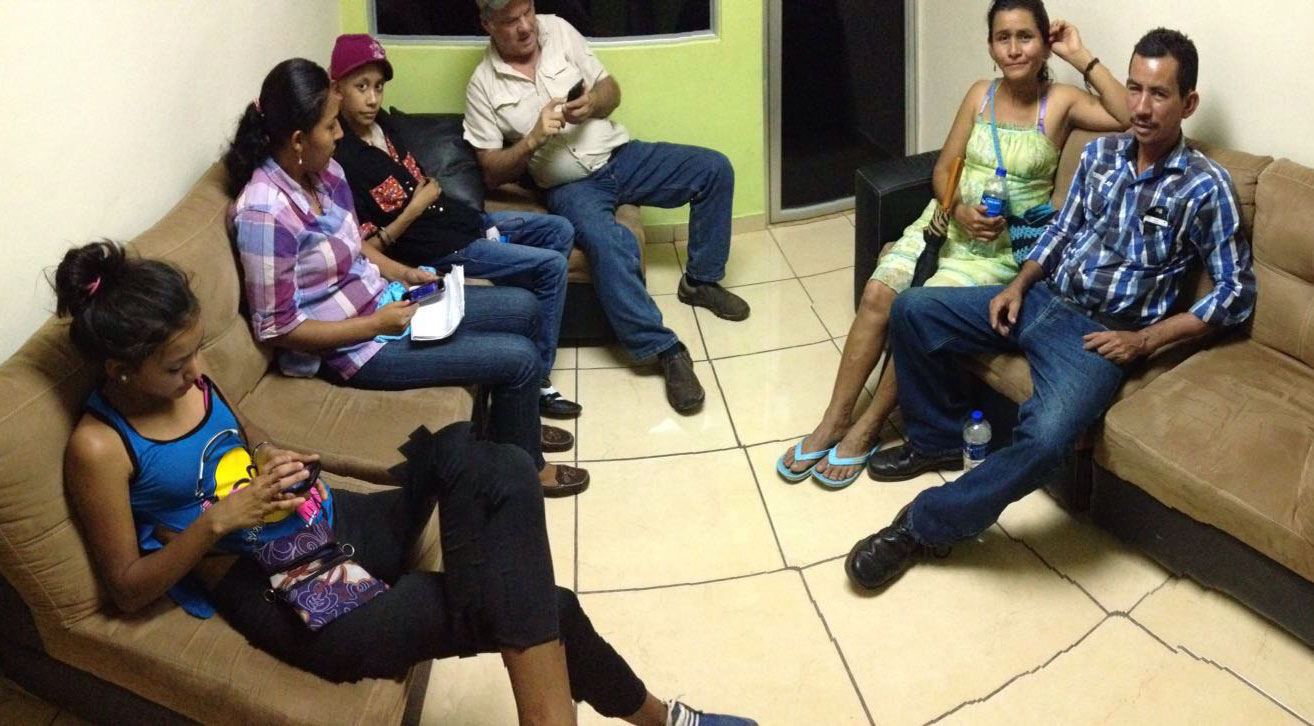 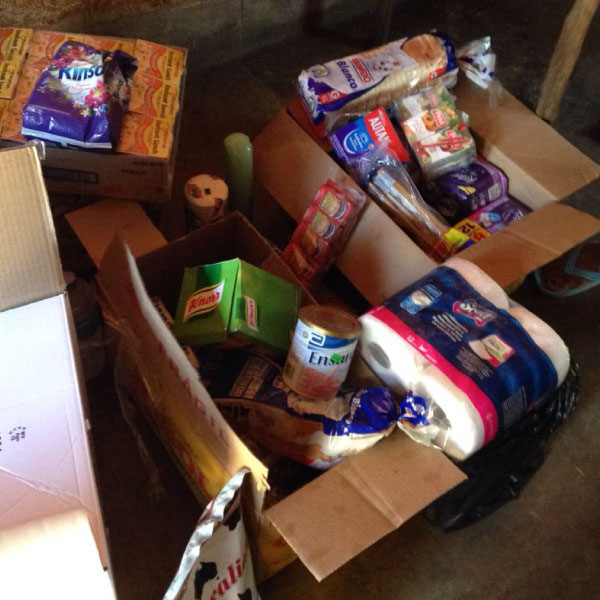 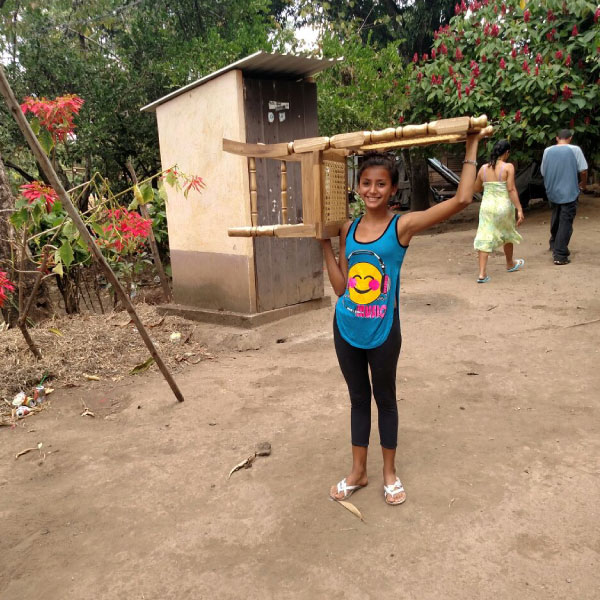 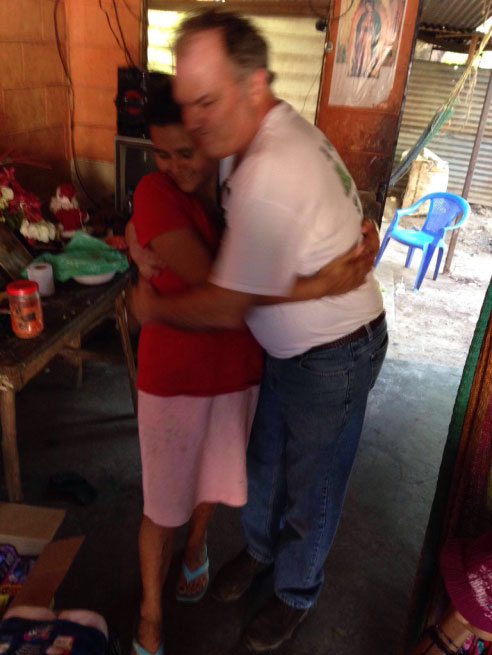 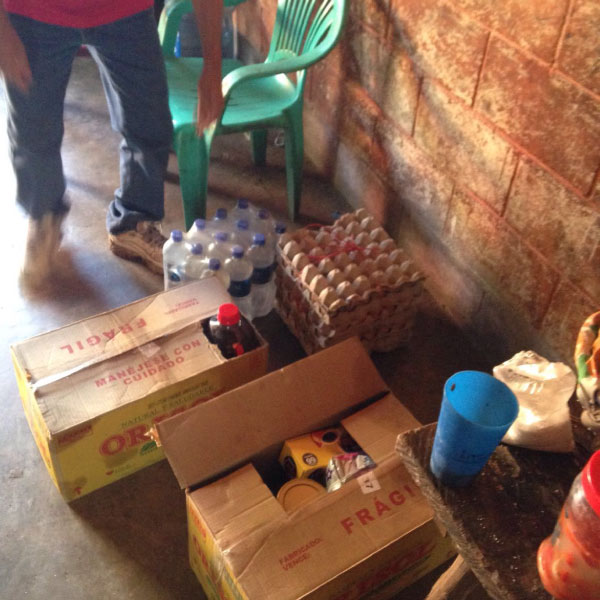 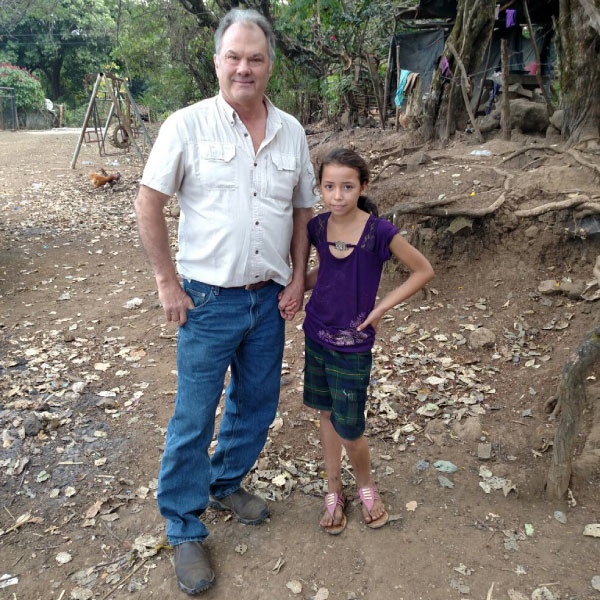 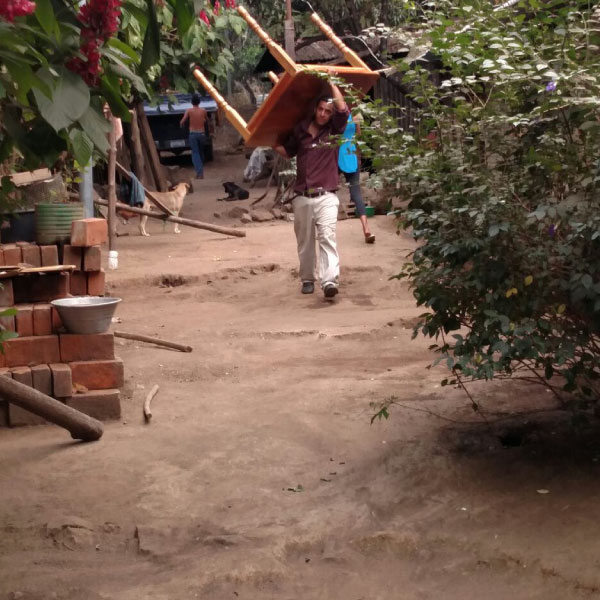 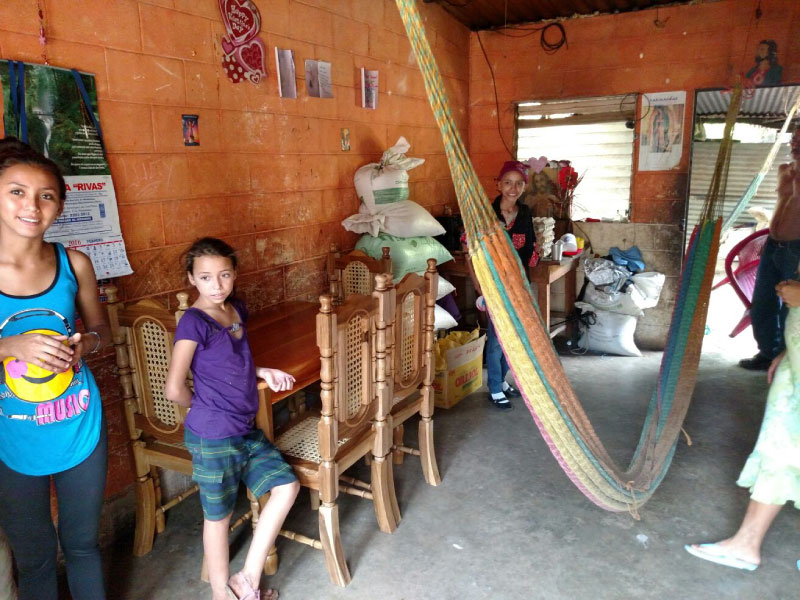