There is a correction, lost somewhere in translation, that Mr. Maravilla is 59 years old and not 70. I am sure the 15 years of suffering he has endured has felt like an eternity compared to the 11 years I was trying to add to his life. He also has a first name, José.

Mr. Maravilla is an interesting fellow, sharing about some injuries he received during the civil war, but mostly his memory revolves around his struggle with his feet and legs, and the path he has been on trying to find help. If he had paper and a pen and the ability to write, he would be able to author a book about his travels searching out hospitals, medical clinics, churches, or anyone who would help. He would also be able to report on the status of the human condition in El Salvador.

It’s Monday morning, and we picked up Mr. Maravilla to transport him to Dr. Urrutia‘s clinic as we had promised him. This privately ran clinic is a great blessing for the people of Berlín that either have or can find the resources to receive medical treatment here. Since they could see that his condition was dire, he was immediately placed in an examination room. The doctor and nurses were very respectful and gentle while consulting and unwrapping his bandages. It was very disturbing to witness this because Mr. Maravilla would scream and tears flowed from his eyes as they very carefully unwound each layer of bandage. It became so bad that at one point they injected some type of powerful pain management drug into his IV port. Within a few minutes, Jose exclaimed, “I feel like I am drunk!” The pain must have been excruciating because he yelled even after they had soaked the remaining bandages in sterile water.

It was a time-consuming process; there were many layers and the wounds are large on both legs. Part of the problem arises from the fact that the public hospital that we rescued him from had wrapped plain gauze round and round his seeping wounds without first applying any type of ointment, antibacterial cream, or dermal patch that would have kept the bandaging from being welded to his raw, skinless legs. As they got closer to the last few wraps of gauze, he asked if they would allow him to remove the final pieces, so he could control the pace and the pain that was being delivered. He was handed a latex glove, and he put it on as if he was a skilled surgeon. A regimen of antibiotics was delivered to his veins by the IV hanging next to him.

The cleaning of the raw meat was as excruciating as the removal of the bandages. Dr. Urrutia sprayed some type of solution on Jose’s calves causing him to scream as if a torch was being applied to his legs. The nurse quickly began fanning his raw legs with the folder that held Jose’s life story to try to provide some relief. Mr. Maravilla slowly looked up and stated, “You have just witnessed what has become my daily ritual for as long as my memory will allow me to remember.” 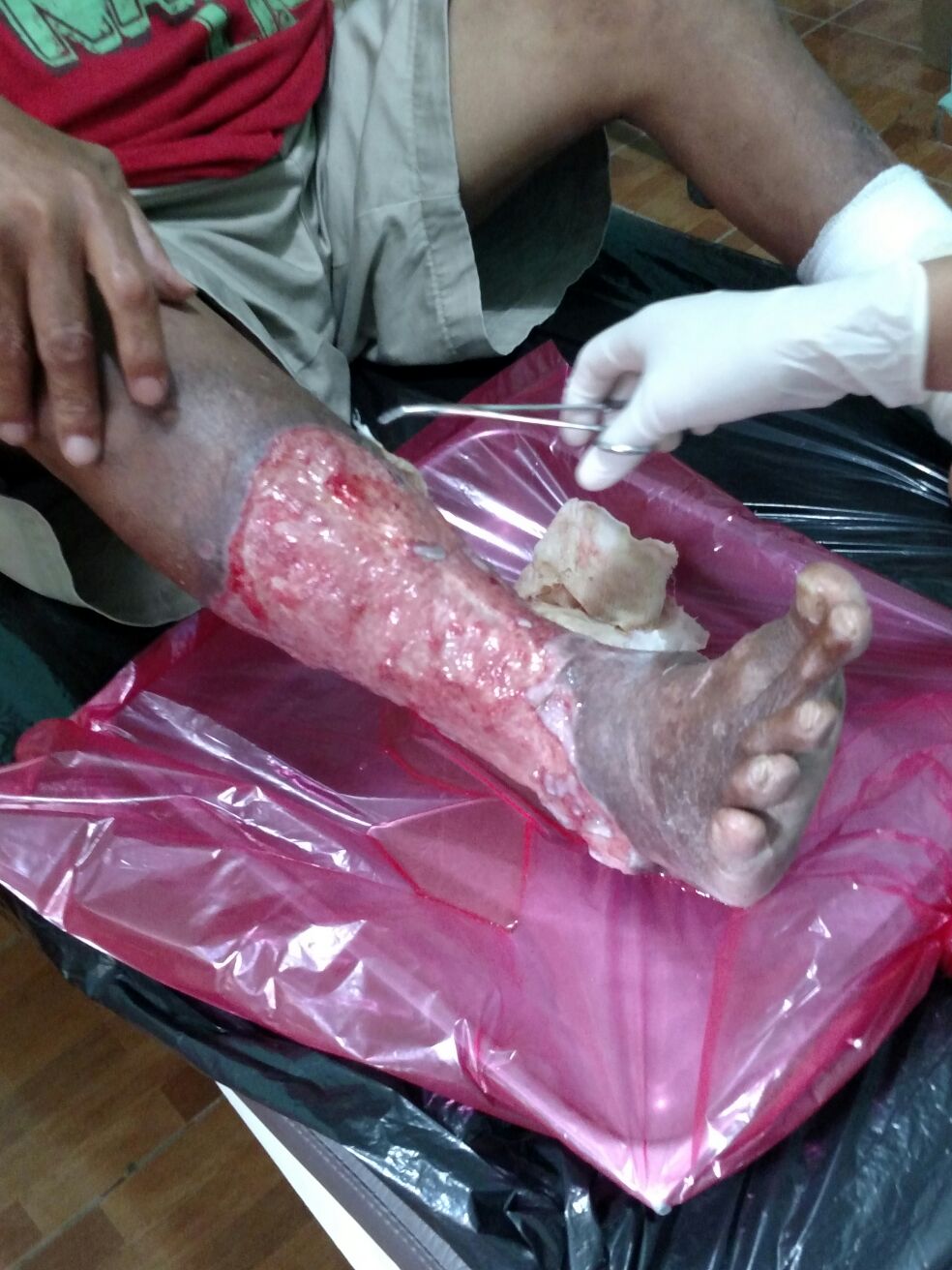 Witnessing this ordeal makes me wonder why a man of such faith is forced to endure this “DAILY PENANCE.” 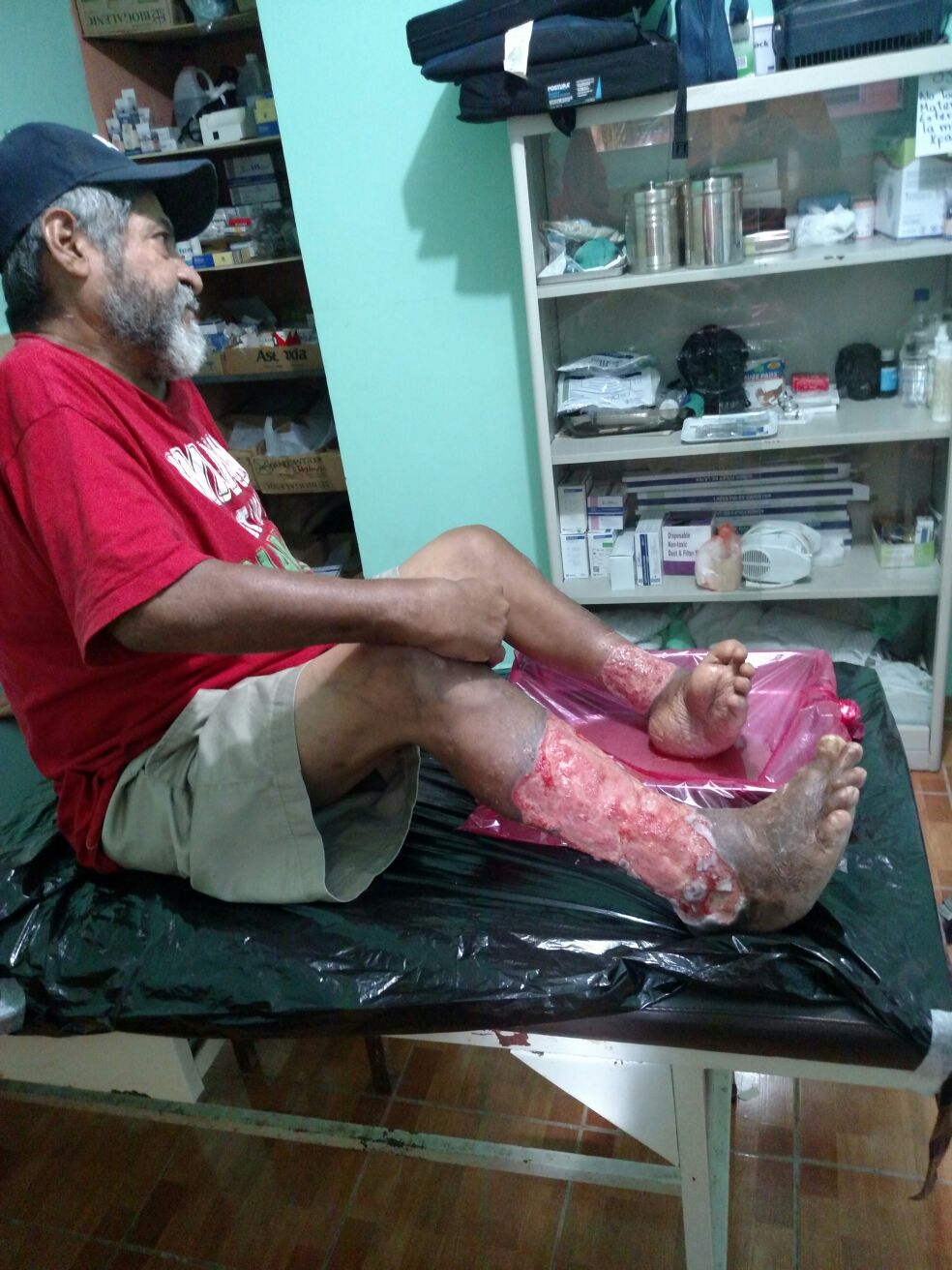 The nurse and doctor slowly and methodically applied some type of ointment and skin patches and then began the process of re-wrapping the wounds until they were completely covered. At some time during this final phase, Jose had fallen asleep; probably from the medication that had been administered, as well as the fact that he was exhausted from not being able to sleep from the pain. It was a relief to witness him not suffering.

We woke him after his brief nap to finish the paperwork required for his records. He said that he felt more relief than he has in a long time. Hopefully, it wasn’t just the drugs, rather he is on a path to a solution. He started talking again about all the places he had sought help but was turned away. I told Jose that this would be his last stop.

The doctor told him to come back tomorrow, and he would repeat what he had just preformed. Dr. Urrutia explained that it would be at least three months before a semblance of normality would appear. If all goes well, the daily ritual will become a thing of the past.

WE LOST MOST OF THE DAY IN THAT LITTLE ROOM , BUT MR. MARAVILLA WON NEW FRIENDS.